Off the Coast with Paul Rhoads 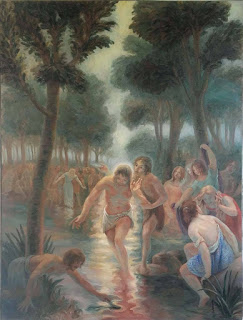 This episode of the podcast is an interview with artist, writer and composer Paul Rhoads. Paul has some very interesting opinions and certainly is willing to go against popular thought. Our talk is mostly about painting and culture:
Off the Coast with Paul Rhoads


For more about Paul check out his youtube channel: Thought Thug


A link to Rubens' book on the human figure: https://archive.org/details/theoriedelafigur00rube

This video of Paul's gives an excellent introduction to what I call the perfect painting method: 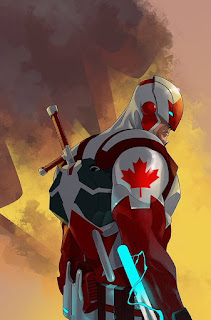 I am relaunching my podcast with an aim to make it a little more consistent. I will be interviewing individuals, mostly artists to start with, whose work I am interested in. These will be  fine and sacred artists as well as comic book artists and illustrators.

My first interview is with Kalman Andrasofszky. Kalman is a Toronto native, best know for his work on the relaunch of Captain Canuck. His career spans 17 years and includes card work, covers, a creator owned series for DC and a member of R.A.I.D. studios. To wrap it up we go in-depth into his work for Chapterhouse Comics. Hope you enjoy.

Click on this link:
Off The Coast with Kalman Andrasofszky
Podcast intro music "Amnesthesia" by Kid Cholera
Exit music : "More Like You" by Brave Shores 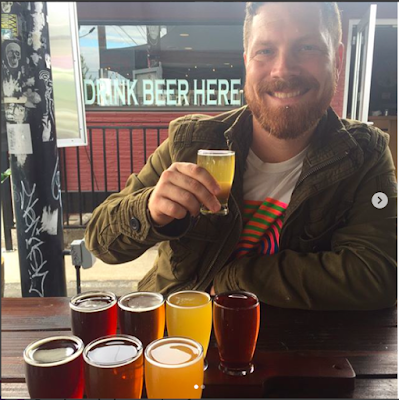 Northern Portugal is filled with interesting figurative sculpture. Mostly in bronze, they range from 19th century pieces up to the contemporary. I am not sure how the Portuguese managed to continue this wonderful tradition while the rest of Europe fell to the curse of the postmodern but I suspect it may have to do with the strong Catholic traditions embeded in the culture while Salazar was ruling the country. From the city to small village you will find interesting and often beautiful works.

To start this series lets take a look at Praça da República in Porto.The square was opened in the latter half of the 18th century. Shortly after the military headquarters was built on the north side and the area was used for military maneuvers. In 1910, upon the proclamation of the Republic, the square was further developed with the addition of flower beds and the sculptures below. 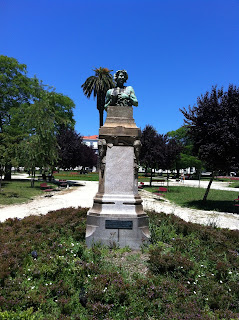 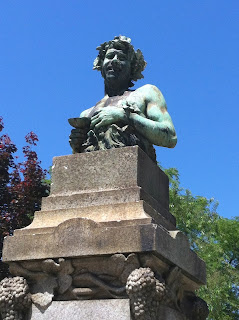 According to the plaque,  this Bacchus was erected in 1916 to commemorate the sixth anniversary of the Republic of Portugal. The sculptor was António Teixeira Lopes. 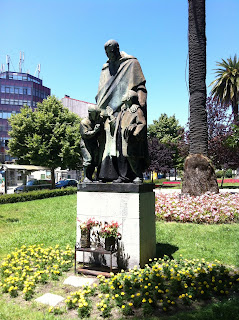 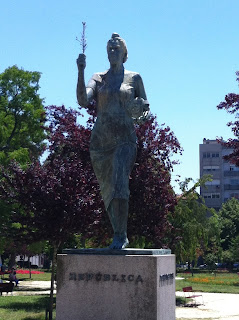 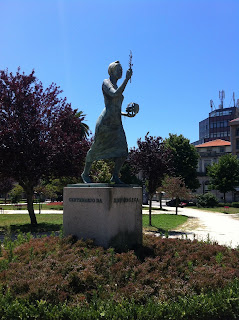 This allegorical sculpture by Bruno Marques commemorates the 100 anniversary of the Portuguese Republic. She is holding a palm branch (signifying peace) and a crest of Portugal.

Posted by Off the Coast of Utopia at 6:48 AM No comments:

THE RESURRECTION OF THE SON OF GOD 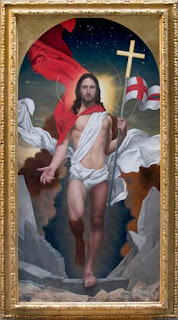 I have talked about the great Russian filmmaker Andrei Tarkovsky on this blog before. His film,  Andrei Rublov is the best movie about art making and perhaps my favourite movie. If you have not seen it I highly recommend it. You can watch it online here: http://sovietmoviesonline.com/en/drama/73-andrey-rublev.html

Tarkovsky's views on art are very interesting and go counter to what we are told is art in our post-modern culture. I, for one, find myself agreeing with him.

Posted by Off the Coast of Utopia at 5:51 PM No comments:

The Superficiality of Modern Art and Architecture

"There is no such thing as understanding art in any period apart from the philosophy of that period.  Philosophy inspires art, and art reflects philosophy.  We can never tell what the art of an age is unless we know what is the thought of the age.  If the thought is lofty and spiritual, art will be lofty and spiritual; if the thought is base and material, art will be base and material.  If the thought is of the heavens and heavenly, art will be of the heavens and heavenly; if the thought is of the earth and earthly, art will be of the earth and earthly.  In that period of Grecian history, for example, when Plato and Socrates and Aristotle were giving eternal truths to men, the clear lines of the Parthenon and the airy Ionic of the Erechtheion served as so many petrified incarnations of their thought.  Closer to our own times, when Rousseau set loose this exaltation of the ego and the romanticism of sense-passion, artists were found drinking at his fountain the shallow drafts of hatred for academic tradition, a license of inspiration, and a glorification of fleshy sensibilities.  And now in our own day, what is the philosophical inspiration of Futurism and its wild love of novelty and 'absolute commencements,' motion for motion's sake, but the thought of Henri Bergson?  What is the philosophical inspiration of Cubism, with is unrelated blocks, but the philosophy of Pluralism, which maintains that the multiple does not imply the unit?  What is the whole inspiration of modern art but a Subjectivism introduced by Kant and his school, the heritage of which is a belief that no work of art itself is beautiful, but that it is our psychic or mental states that are beautiful, either because we project these states to the object, which is the Einfühlung theory, or because they harmonize with the tastes and commandments of society, which is the sociological theory, or because they produce intersecting reactions, which is the Pragmatic theory?  If modern philosophy explains modern art, medieval philosophy explains medieval art.  If we are to understand why they painted and why they sculptured and why they built a certain way, we must ask ourselves how they thought, for art is the lyrical expression of philosophy.  Their civilization was much different from our own; in the thirteenth century, Christendom knew but one Church.  There was just one Faith, one Lord, one Baptism, one Church.  Since it was one in its rule of faith, it is easy to extract those basic principles of medieval life which served as the inspiration of their art.  These principles are threefold: (1) Impersonalism, (20 Dogmatism, and (3) Sacramentalism."
-Old Errors and New Labels by Fulton J. Sheen, c. 1931.

In architecture is reflected a philosophy of life. The philosophical basis of the contemporary world is materialism, that is, the negation of the spirit. If, however, no other world exists, only what can be seen, palpated and scientifically analyzed, then it is clear that there can never be architectural ornamentation as ornamentation is a symbol of communication with the immaterial through matter. Ornamentation implies or assumes that there is another world beyond this around us. The buildings of modern architecture therefore resemble glass cages and boxes of giant shoes, built on stilts. They are purely functional buildings since the only function in a materialistic civilization is the business or exchange of things of this world. 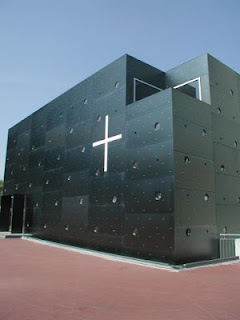 When civilization was inspired by a more joyful philosophy, when things visible were appreciated as external expressions of invisible things, the architecture was ennobled with countless ornaments: the pelican feeding the children with the very blood of its veins symbolized the sacrifice of Jesus Christ; the lion breathing life into dead offspring represented the Resurrection; the fox, peering at the door of his den, served as a prescient warning of Satan's traps. With his triumphal entry into Jerusalem, Our Lord said that if the men were steadfast in their faith in God, even the very stones would proclaim His triumph. This actually came to pass in the the Gothic cathedrals! 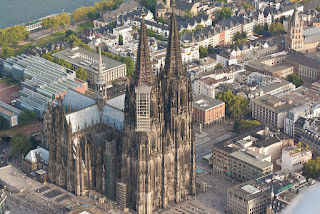 Now, the stones no longer speak, because men today do not believe in the existence of another world, do not expect for themselves other destination than the same of inert stones. With faith in the spiritual lost, architecture ceases to express or symbolize. 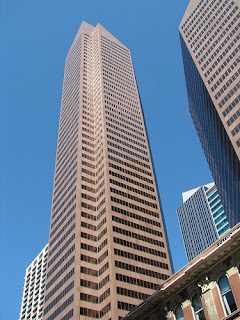 This was reblogged from the original in Portuguese: http://civilitaschristiana.blogspot.pt/2011/03/superficialidade-da-arquitetura-moderna.html
*my addition

I was unable to find this passage in the original English.
Posted by Off the Coast of Utopia at 9:25 AM No comments:

A Recipe for Tempera Putrido

Tempera putrido is like 'white-out' for oil painters. It is a white that can be used for corrections in a painting where you have to paint a light over a dark. The putrido will dry quickly and will not become transparent over time as a regular white would.

This recipe came to me via John Angel who had a tube of it in his fridge back in the early 2000's. I was responsible for moving his home to a new apartment and I forgot the tube of putrido.  It worked wonderfully and so I am not sure if I will ever live it down.

You will need both tempera white and oil white:

The  pigment can be titanium white or lead white although lead pigment is highly toxic if breathed in.

Then: one part oil white ground in one part tempera white will give you tempera putrido. Tube it and  store it in the fridge.

Posted by Off the Coast of Utopia at 7:31 AM No comments: