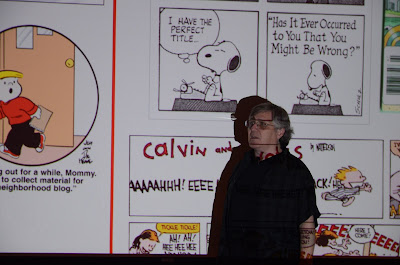 This past Thursday, Friday and Saturday I was in Alberta's windy city, Lethbridge, taking a workshop with comic artist and theorist, Scott McCloud. His 2005 Tedtalk is one of the best:

As you can see from his talk, he is a fine orator. His teaching skills are equally excellent. The workshop was a combination of exercises and lectures.

There were two in-class exercises structured around how these choices could create clarity and/or intensity. Students were given various non-sensical situations that had to be translated into images. Mine, for example, involved an astronaut walking into a petting zoo, picking up a goat and throwing it at the moon. After the goat bounces off the moon enter Einstein on a camel who proceeds to shake the hand of the astronaut.
The larger project for that day was a 16 panel comic describing our life: 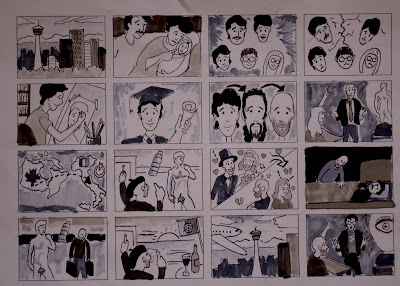 The morning of day two was spent looking at and critiquing the "Life" comics. 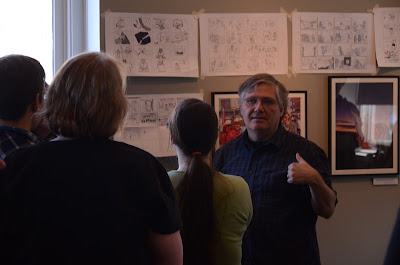 Scott introduced us to the Grimace Project followed by a lecture on facial expressions and gestures. He then assigned us the task of translating various emotions and gestures into drawings. The last project of the day involved us picking a hawaiian word from a hat and translating that into a story. I chose Muumuu. I came up with an elaborate story involving Yoda, Zippy the Clown and Homer Simpson. Needless to say, I never finished.
Overall a fantastic workshop. Always nice to stretch the artistic muscles in a new direction.
I will leave you with a snap of the Alberta prairies from my drive back to Calgary. 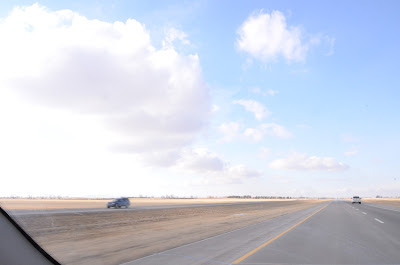 Posted by Off the Coast of Utopia at 8:57 PM

It was a pretty awesome workshop!